The Republic of Congo is one of those destinations that not many people know about, yet it offers so much for the adventurous traveler. Head deep into the central African rainforest in search of forest adapted animals including chimpanzees, forest elephants and buffalo, incredible birdlife and of course lowland gorillas. Tourism has been taking off in the Republic of Congo with the partnership between African Parks and the Congo Conservation Company who have set up luxury camps in key areas of the country. 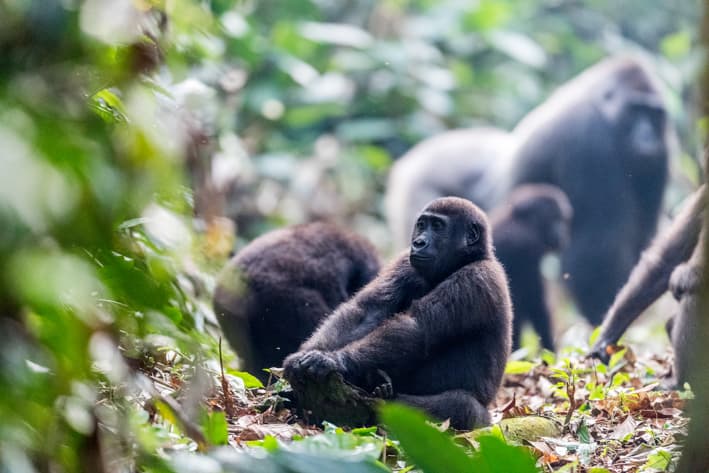 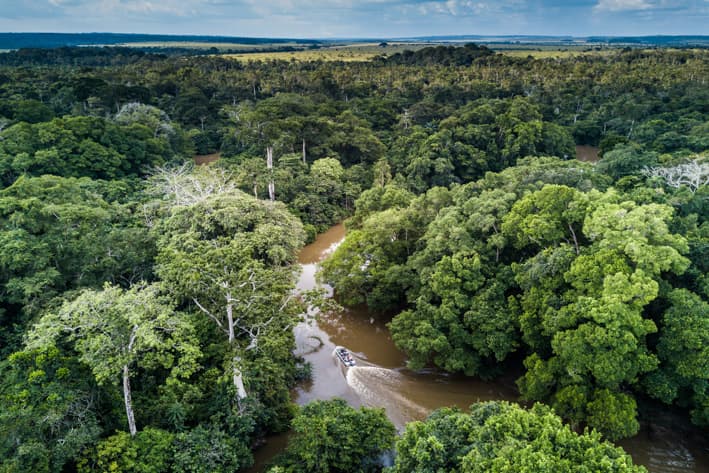 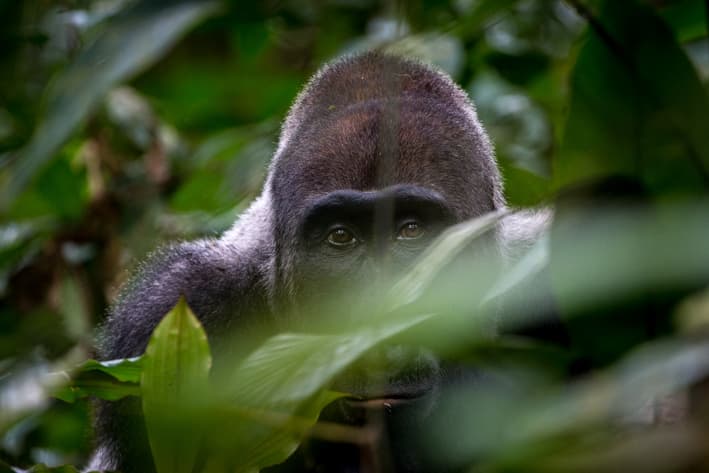 A safari to the Republic of Congo and CAR have been off limits for sometime, but after a lot of hard work and perseverance, the area is slowly opening up to a few adventurous explorers wanting to track lowland gorillas, forest elephants and buffalo and experience Africa’s answer to the Amazon. The tropical jungle that stretches from the Atlantic Ocean as far north as the Sahara Desert are home to some of the most diverse animals on the planet. Very few tourists make it this far which makes this destination even more rewarding.

The Congo jungle Basin is home to the greatest number of mammals, primates, birds and other animals in Africa, including some of the last remaining lowland gorillas. Smaller and more agile than mountain gorillas, Lowland gorillas live in the dense forest of Central Africa, but thanks to years of research, there are a few habituated families that allow small groups of tourists to spend an hour with them as they go about their daily lives. To limit the impact on their lives, groups are restricted to a maximum of 6 people and limited to 1 hour a day.

Aside from lowland gorilla tracking, the Congo and Central African Republic are home to over 1000 species of birds, making it a birders paradise. Explorers to the Odzala-Kokoua and Dzanga-Sangha National Parks explore the huge wetlands and tropical forests on foot and by boat. One of the highlights is spending time at the different forest bais, which are clearings in the jungle that attract herds of forest elephants, forest buffalo and other animals that come to get their mineral fix, from the mineral rich waterholes in the clearings.

These regions of Africa have largely been off limits to tourists, but thanks to the conservation efforts of a few individuals, these areas still remain true wildernesses with thriving wildlife. By visiting these off the beaten track destinations you are contributing to ongoing conservation efforts and so be one of few explorers that get to experience true wilderness in the Congo and Central African Republic.

Gorilla Safaris to The Republic of Congo

The Republic of Congo is one of the most exciting destinations opening up to ecotourism over the years. Adventure travelers explore the equatorial rainforests in search of lowland gorillas, forest elephants, buffalo and incredible birdlife. This is a bucket-list safari experience and is pioneering experiential travel at its best. For the ultimate primate safari, why not combine the mountain gorillas of Rwanda with the lowland gorillas of the Congo Basin.

Where are the best areas to go on safari in The Republic of Congo?

With such a vast undeveloped region, safaris to the Congo and Central African Republic are done to specific regions and camps to ensure the best experience for our guests. We focus our safaris on the pristine rainforests of Odzala National Park in the Republic of Congo and the Dzanga-Sangha Special Reserve in the Central African Republic. With limited access and only a handful of decent lodges, below is our selection of lodges we use for our guests.

Ngaga Camp in Ndzehi Concession, Republic of Congo
Ngaga Camp evokes that childhood memory of having a treehouse in the forest. Built amongst the trees with walkways that curve through the forest, guests get a unique look into the forest canopy. With just 6 ensuite chalets built into the trees, Ngaga Camp is a small intimate camp where guests swap stories of their jungle explorations.

One of the main reasons people would come to Ngaga Camp is for some of the best lowland gorilla tracking in Africa. The camp is home to the Western Lowland Gorilla research team who have spent the past few decades researching and habituating the gorillas in the forest. Guests get to experience the forest on walks with the researchers, learning from their decades of exploring these forest paths. Aside from the gorilla tracking, guests can enjoy day and night forest walks as well as having the opportunity to meet the local community and learn more about life in the forest.

Lango Camp in Odzala-Kokoua National Park, Republic of Congo
Lango Camp is built on the edge of Lango Bai that is teeming with herds of forest elephants, forest buffalo, flocks of green pigeons and African grey parrots. The elevated decks, boardwalks and chalets all allow for great views of this incredible wildlife hotspot.

Guests staying at Lango Camp have the opportunity of exploring the forests around the camp, following elephant trails through streams, bais and forests. This is a true adventurer’s playground as you get wet and muddy following in the footsteps of the elephants and buffalo.

Mboko Camp in Odzala-Kokoua National Park, Republic of Congo
Mboko Camp is located on the edge of the forest where grasslands meet jungle. Here guests explore the grasslands with towering termite mounds, jungles teeming with wildlife and rivers that cut through the canopy of trees. At Mboko Camp guests enjoy walks as well as game drives through the forest and grasslands and then get to explore the river system by boat and kayak.

Sangha Lodge in Dzanga-Sangha Special Reserve, Central African Republic
Sangha Lodge is one of the original lodges in this part of Africa. Built on stilt overlooking the Sangha River, the lodge has just 7 bungalows each with their ensuite bathroom and viewing deck. Guests at Sangha Lodge are hosted by Rod and Tamar Cassidy who took over the hunting lodge and turned it into one of Africa’s conservation success stories.

Guests staying at Sangha Lodge have the unique opportunity to visit one of Africa’s most incredible wildlife destinations, Dzanga Bai. A Bai is a clearing in the forest that is rich in minerals that attract animals from all over the forest and Dzanga Bai is one of the best. Huge herds of elephants congregate at Dzanga Bai, mixing with forest buffalo, bongos, forest hogs and occasionally lowland gorillas.

Sangha Lodge works closely with the local Ba’Aka tribe, giving guests an opportunity to head with them as they go on a traditional net hunt in the forest. Aside from this, guests can explore the Sangha River by boat or kayak, they can head into the forest on jungle walks exploring hidden rivers and waterfalls. Rod and Tamar has setup a pangolin conservation center where rescued pangolins can recover before being released back into the wild.

The Congo basin forms one of the most important wilderness areas with over 500 million acres, it is the second largest tropical rainforest on earth. Within this vast expanse of tropical forest is the Odzala-Kokoua National Park, covering approximately 3,3 million acres and home to approximately 22,000 lowland gorillas.

Odzala-Kokoua National Park is one of Africa’s oldest national parks, created in 1935, it is now under the management of African Parks, with the Congo Conservation Camps bring tourists to experience one of the worlds last intact ecosystems. The forests, grassy savannas, bais and rivers of Odzala-Kokoua National Park are home to some of the worlds rarest animals including forest elephants, forest buffalo, forest hogs, sitatunga antelope, chimpanzees and thousands of birds.

Guests staying at the 3 lodges within the park and surrounding ecosystem get to explore the forests of Odzala-Kokoua National Park, following elephant trails, kayaking along rivers or enjoying a game drive across the grassy savanna and tracking lowland gorillas through the forest. Tracking lowland gorillas through the forests of Odzala-Kokoua is an experience you will never forget. Once the family has been found, guests get to spend an hour with them as they go about their daily lives. Being smaller, than mountain gorillas, lowland gorillas are more mobile and will often climb trees to access the fresh fruits and leaves that they feed on.

Jungle walks are led by experienced guides or researchers and follow elephant paths as they crisscross the jungle leading to clearings or bais that are rich in minerals. This is a real adventure that requires a bit of getting wet and muddy as the paths cross streams and small rivers. Nighttime walks open up a whole new experience as nocturnal creatures wake up. Insects, bats, scorpions and more can be seen on night walks through the forest.

Exploring the vast river systems by kayak or boat allow you to explore deeper into the jungles. Along some of the smaller tributaries, guests can kayak and often see forest elephants and forest buffalo coming down for a drink. Gliding silently, allows for some incredible close-up experiences.

Best time to go to The Republic of Congo

When is the best Season to go to on a gorilla safari to the Congo?

The name rainforest should be a clue as to what to expect when visiting the Congo and Central African Republic. Being so close to the equator, the Republic of Congo and in particular, Odzala National Park, have fairly constant temperatures throughout the year, averaging between 25°C (77°F) and 28°C (82°F). With its location on the equator and due to the amount of rainfall Odzala gets, the forests get exceptionally humid, but when it does rain, it cools things down.

The dry season, if we can call it that, in the Congo is between June and September, with a gentler rainy season between December and February. Because of the weather with no real dry season, the larger animals do not migrate and so are seen throughout the year. These include forest elephants, forest buffalo, lowland gorillas. Animals like chimpanzees, bongos and some other primates are shyer and harder to see, but the longer you spend exploring the forest the more chance you have of seeing these rarer animals.