Why we love safaris to Rwanda

Incredible landscapes, phenomenal wildlife and a commitment to people and planet…

Known as the “land of a thousand hills” because of its breathtaking topography, the land-locked central African nation of Rwanda is one of the continent’s most heartening success stories, in spite of its turbulent past..

It’s the African phoenix – a country rising from the ashes of genocide to become one of the most sought-after tourism destinations on the continent, celebrated for its peace and prosperity and determination to learn from the past and not repeat its mistakes. This is Rwanda… Beautiful, vibrant and inspiring at every turn.

The country made headlines across the world in 1994 thanks to the government-driven genocide of the Tutsi people that saw more than a million slaughtered over a period of just 100 days. At that time it represented all that was bad about both Africa and humanity and no one could have imagined that within three decades it would be globally lauded as a shining example of both.

In that time, Rwanda has come together as a united nation to rebuild and surpass the expectations of an often patronising world, focussing on economic growth underpinned by a deep commitment to bringing its diverse people together, protecting its wilderness areas, restocking its national parks and instituting lasting social change. Today, the Batwa, Bahutu and Batutsi people live in unity and harmony, celebrating their cultures as Rwandans first.

Rwanda truly is a nation transformed, as Stanley Safaris founder, Shaun Stanley, explains. “I first visited Rwanda in 2002 and we were some of the first tourists to drive through the country after the genocide,” says Shaun. “The streets were lined with refugees walking to refugee camps, but I could already see changes in the country. We stayed with a couple of Europeans that were working for NGOs in the country and they were doing a lot of work to help the people.

“I then returned in 2011 and the difference in such a short space of time was incredible. Rwanda is now one of the most successful countries in Africa when it comes to tourism and conservation. Money made through gorilla tracking permits has allowed Rwanda to restock Akagera National Park with animals that had been poached out during the genocide. It’s a truly inspirational place and an absolute must-visit African country.”

The capital of Kigali is well worth a couple of days to spend exploring and discovering more about Rwanda, its history and its people.

“Kigali is vibrant and one of my favourite capital cities in Africa,” says Shaun. “A top tip is to visit the Genocide Memorial when you arrive in the country, so you can have a better understanding of what went on in the 1990s. It is a very moving memorial and gives you amazing context for the rest of your safari.”

In November 2021 Rwanda’s Akagera National Park became the new home of 30 southern white rhinos translocated from South Africa’s Phinda Game Reserve in what is the largest single rhino translocation yet undertaken. It’s a moment in the country’s conservation history that’s deserving of celebration, given that only 30 years ago Akagera was virtually devoid of life, thanks to the scourges of genocide, poaching and political instability.

While renowned for its mountain gorillas in the Volcanoes National Park, the protection and conservation of which has effectively put Rwanda back on the tourism map, Akagera is perhaps its most remarkable conservation achievement.

It’s been managed by the Rwanda Development Board in partnership with African Parks since 2010 and in that time has been returned to a pristine wilderness filled with a rich diversity of wild fauna and flora and home to the Big Five. In the process it has become one of Africa’s most coveted wildlife destinations and a critical driver of the country’s sustainable tourism initiatives.

In 2017 Akagera became home to 18 eastern black rhinos – a return of the species to the country after a decade-long absence. They were joined in 2019 by five eastern black rhinos from European zoos. With the introduction of the white rhino, Akagera is now a critically important sanctuary for rhinos.

Gorillas, and so much more…

Volcanoes National Park and its celebrated mountain gorillas have helped to drive Rwanda’s emergence as a major player on the global tourism stage. They also help to fund the country’s major conservation efforts and the sustainable development of its wilderness areas.

Towering at almost 4,500m high, the Virunga mountain range forms a natural border with neighbouring Uganda and the Republic of Congo. This is the land of “gorillas in the mist” – primatologist Dian Fossey’s home and her final resting place. Gorilla trekking is what it’s all about, so it’s good to have a top tip from our founder…

“We always recommend tracking the gorillas twice,” says Shaun. “The first time you are with them you spend your time behind the camera taking pictures and the hour goes by so quickly that you actually don’t get to appreciate and enjoy the experience,” he explains. “The second time round, you tend to put your camera down and engage more with the gorillas, creating lasting memories of the experience.”

Spending time in local villages and interacting with the local people is also highly recommended, learning abouts their rich culture and traditions and watching the spectacular intore dancing. Complement it by sampling some sensational Rwandan coffee which is grown in the highlands here.

Lake Kivu is the perfect place to stop for a few days en-route to or from Volcanoes National Park, with its spectacular vistas and archipelago of island and some world-class hotels and resorts on its shores. You can hike to your heart’s content or cycle along the lakeshore, as well as kayaking and a variety of boat-based activities.

That Rwanda has emerged from the darkest days of its history with such verve, passion and determination to move forward without forgetting is a lesson to the rest of Africa in true reconciliation. If you’d like to visit this remarkable country, let’s chat and get you there as soon as we can! 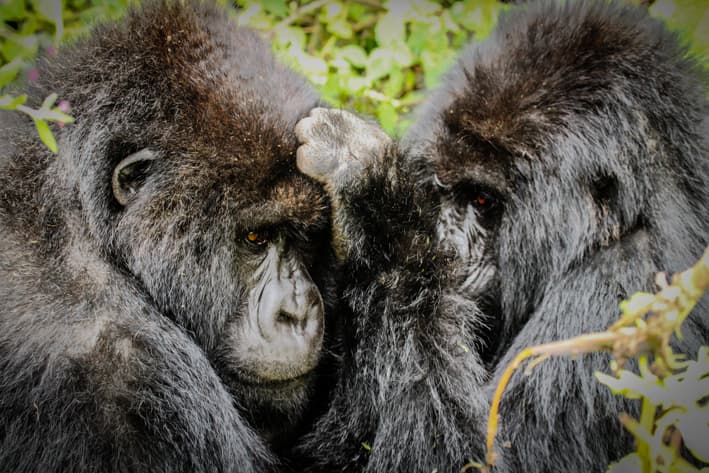 A Guide to Gorilla Tracking